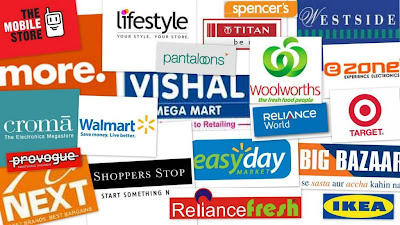 1.  Introduction
he Indian retail landscape is evolved from the brick-and-mortar model to adopt technology for connecting with consumers. The aim is to achieve a complete seamless customer experience. The Indian retail sector accounts for over 20% of the country’s gross domestic product (GDP) and contributes 8% to total employment. The cumulative foreign direct investment (FDI) inflows in single-brand retail trading, during April 2000 to June 2011, stood at 69.26 million USD. The current estimated value of the Indian retail sector is about 500 billion USD and is pegged to reach 1.3 trillion USD by 2020.

The total concept and idea of shopping has undergone a vast drawing change in terms of format and consumer buying behavior, ushering in a revolution in shopping in India. Modern retailing has entered into India as is observed in the form of sprawling shopping centers, multi-storied malls and the huge complexes that offer shopping, entertainment and food all under one roof.
The Indian retail industry has experienced growth of 10.6% between 2010 and 2012 and is expected to increase to USD 750-850 billion by 2015. The industry has long way to go as there is a huge opportunity in streamlining the sector. Indian retail sector is gradually inching its way towards becoming the next boom industry. 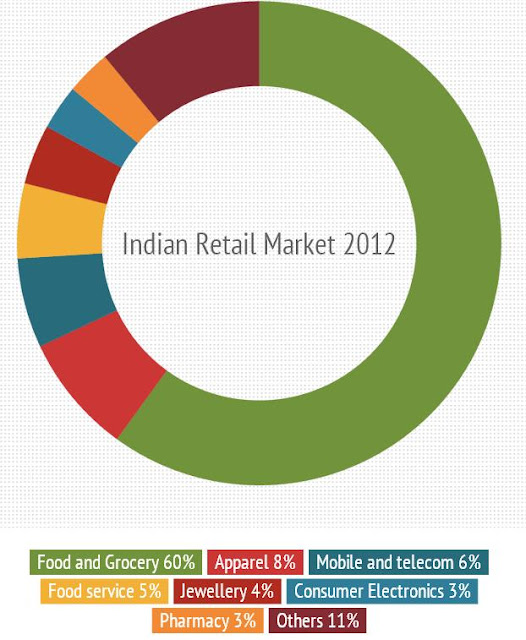 Food and Grocery is the largest category within the retail sector with 60 % followed by Apparel and Mobile segment.

Currently India constitutes only 8% of organized retail and remaining 92% is left unorganized, which may grow much faster than traditional retail. It is expected to gain a higher share in the growing pie of the retail market in India. Various estimates put the share of organized retail as 20% by 2020.
The growth pattern in organized retailing and in the consumption made by the Indian population may follow a rising graph helping the newer businessmen to enter the India Retail Industry.
The country's traditional retail industry is expected to grow at an average annual rate of 5% over the next year, while the organised retail is estimated to register a growth rate of around 25% during this period.

Within the organized retail sector, Apparel is the largest segment. “Food and Grocery” and “Mobile and telecom” are the other major contributors to this segment.

The current sign of reforms by the Government to initiate Foreign Direct Investment (FDI) in various sectors is bringing a new enthusiasm to the investment climate in India.
The recent announcement by the Indian government with Foreign Direct Investment (FDI) in retail, especially allowing 100% FDI in single brands and multi-brand FDI has created positive sentiments in the retail sector.
The major opposition party of India and its allies are currently opposing the FDI in multi-brand retail. Some of the ruling party allies such as DMK, UDF (Kerala) are also against the policy. 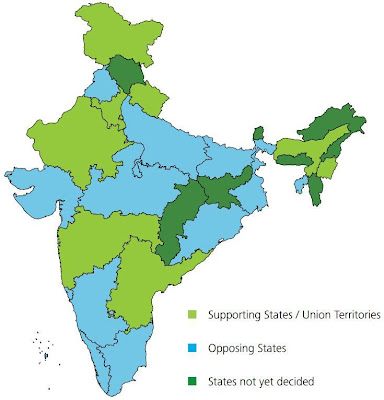 Foreign entrants in the Indian segment are as follows:

The growing disposable income in the country is resulting in increasing consumer spending habits. A large young working population with median age of 24 years, nuclear families in urban areas, along with increasing workingwomen population and emerging opportunities in the services sector are going to be the key factors in the growth of the organized Retail sector in India.

Factors driving the organised retail sector include the following:

As a strategy, retailers continue to focus on improving the operations machinery of the business, shifting to low cost channels, promoting private labels, emphasis on increasing customer base, improving in cost structure, discounts and offers and innovative strategies such as ‘flat discounts’, sale during wee hours of morning or late till midnight, are some of them. 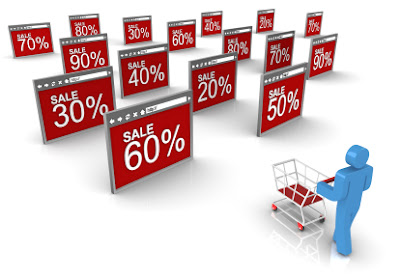 India remains a high-potential market with accelerated retail growth of 15 to 20 percent expected over the next five years. Growth is supported by strong macroeconomic conditions, including a 6 to 7 percent rise in GDP, higher disposable incomes, and rapid urbanization. Yet, while the overall retail market contributes to 14 percent of India's GDP, organized retail penetration remains low, at 5 to 6 percent, indicating room for growth.

India’s large and aspiring middle class of 75 million households or 300 million individuals want products that are value-driven. The country’s 500 million people under the age of 25 have access to more money that has additionally resulted in independence, aspirations and a demand for products. 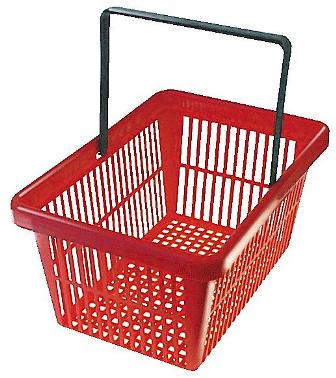 Companies such as Gap, IKEA, and Abercrombie & Fitch are stepping up inquiries to enter the market, while others are seeking local partners. Hypermarkets and supermarkets continue to dominate, but cash-and-carry is growing fast, with significant expansion from Bharti Wal-Mart, Metro Group, Carrefour etc.

11. Technology in Indian Retail
In India, the use of IT is confined to the organised sector, a small proportion of the retail industry. In general, mid-sized players are only using point-of-sale (POS) and basic systems like stores software, SKU software, etc. However, small modern retailers have hardly made investments in IT infrastructure.
Barcode scanning was the first major technology application adopted by Indian retailers that ushered in a new level of automation to front-end point-of-sale processes. Using scanning technologies made cashiers more productive, reduced the number of errors at the register and made the inventory and buying trends more visible and accurate.
India’s retail sector has undergone several technology evolutions to enable retailers to increase efficiency, improve customer service and become more competitive. India’s retail sector, today, is advanced in its adoption of basic IT systems and infrastructure like ERP, networks etc. Medium and large retailers are in the process of establishing robust transaction systems including suitable POS systems, merchandise management systems, CRM systems, and radio-frequency identification 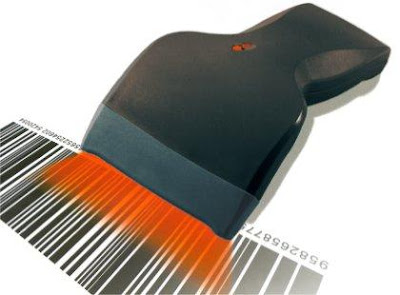 Need for IT solutions - Indian retail
Most Indian retailers need to use advanced IT products and solutions like replenishment planning, world-class supply chain and logistics management systems, business intelligence and analytics systems, warehouse management systems, etc. The growth of the Indian economy is bringing about several changes in consumer demand and purchase patterns. The Indian retail market is difficult to predict, consumers are evolving, and retailers are expanding operations, further driving the need for IT adoption. 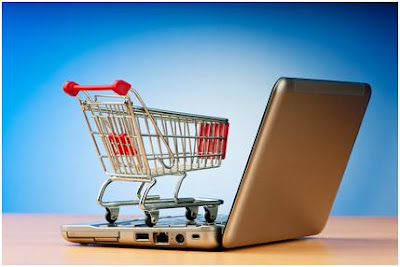 Market is small now, but will grow rapidly in coming years
India’s eCommerce market is at an early stage but is expected to see huge growth over the next four to five years. Over the past 12 months, venture capitalists have invested heavily in India’s eCommerce market, new players have emerged, and the eCommerce ecosystem has developed, presenting a huge opportunity for companies willing to work through some of the logistics and payments challenges in India.
An increasing number of global companies are eyeing the rapidly growing eCommerce market in India. As the world’s 11th-largest economy (and fourth-largest emerging economy after BRIC peers China, Brazil, and Russia), India is starting to appear on eBusiness organizations’ lists of key international markets. 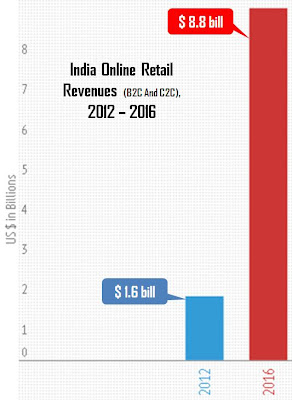 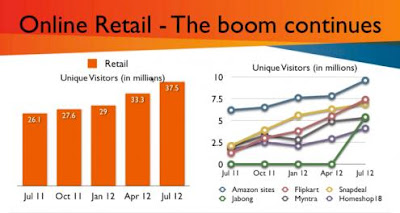 
Indian kids-wear market is growing at a compounded annual growth rate of about 20 per cent and is likely to reach Rs 80,000 crore by 2015. The report has concluded that kids fashion has percolated down to tier-II and tier-III cities like Dehradun, Chandigarh, Pune, Nasik, Indore, and Varanasi so on.
AllSchoolStuff.com, FirstCry, M2C and Babyoye.com are some of the sites that are logging on to the online opportunity. Some of the online kid’s retail business added 10% of their total revenues from this segment last year.

Indian online retail vendors agree that this is a disorganized market and they have huge opportunity to expand their wings and grab the market.
Targeting this group early on clearly seems to be on the agenda of most of the Indian ecommerce players. 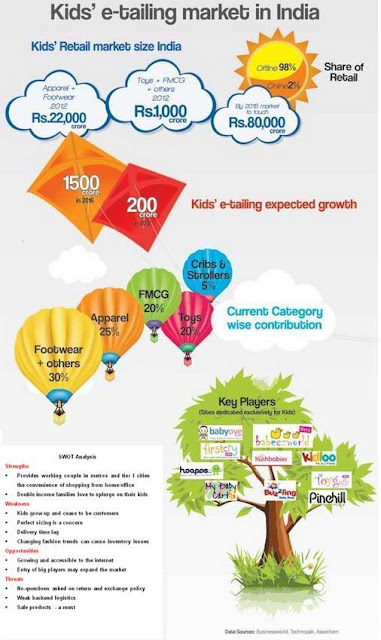 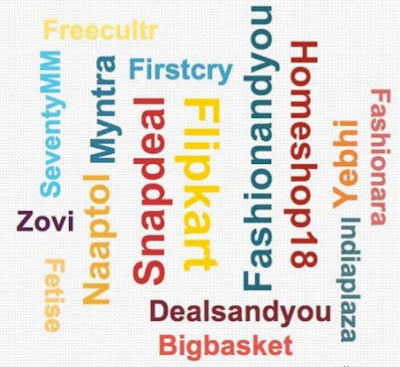 16. Products that Indian online retails sell the most 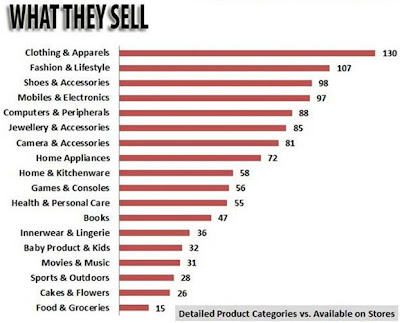 Modern retail in India could be worth US$ 175-200 billion by 2016. The Food Retail Industry in India dominates the shopping basket. The Mobile phone Retail Industry in India is already a US$ 16.7 billion business, growing at over 20 per cent per year. The future of the India Retail Industry looks promising with the growing of the market, with the government policies becoming more favorable and the emerging technologies facilitating operations.
Young Indians are driving purchases in mobile phones, fashion, accessories, food and beverages, quick service restaurants, etc. Young Indians have access to more money than before and with this have come independence, aspirations and a demand for products

The Indian retail sector is evolving rapidly and those who enter the market now can learn about local dynamics, develop market insights and establish leadership positions.

Don’t let India’s low internet penetration distract from the fact that over 50 million Indians already shop online. And this is just the beginning for this emerging marketplace. E-commerce space in India is to quickly match the growth of its overall consumer marketplace.

“The future is promising; the market is growing, government policies are becoming more favorable and emerging technologies are facilitating operations”

Popular posts from this blog

November 11, 2013
According to IDC Research, Overall enterprise applications software (EAS) spending in South Africa is set to increase 10.5% year on year in 2014 to total $518.45 million.
With a further 12 months likely to pass before the new government is fully focused on its investment plans, improved growth is not anticipated for the country's EAS market until 2016. Other factors that will negatively impact the EAS market in 2014 include ongoing economic pressures that are likely to derail the investment plans of large and very large businesses (enterprises). Continuing financial challenges will also limit the access of small and medium-sized businesses (SMBs) to credit and curtail their subsequent investments, while the ongoing challenge of skills shortages will impair the adoption of new technologies.
South African organizations are interested in adopting technologies such as advanced analytics, but are often limited by tight budgets and lack of advanced technical skills.
Organizati…
Read more

The future of e-Learning

- Rajesh Thambala Transforming education for future is an excellent introduction to how digital culture is influencing visions of education.  The argument is that the current educational system exists to prepare people for a 19th and 20th century, and that must be recreated in order to prepare students for future.  This goes beyond reading, writing, math, and science.  It explores the role of digital literacy; critical thinking and problem solving; and new approaches to collaboration, communication and creation.


As the learners want more and more control over the learning process and interactive media caters to that demand. Social learning is playing a vital role but this is just a beginning. Such media provides the learner the advantage of interactive games, scores and instant feedback.